When Man’s Best Friend Is Anything Other Than A Dog 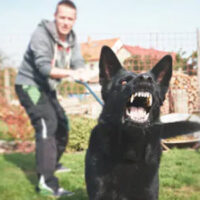 Who doesn’t love dogs?  They are, after all, known as man’s best friend for a reason:  they are loyal and loving, cuddly and dependable.  Nothing warms the heart like a wagging tail and wiggling bottom as you enter the door of your home.  So, seriously, who doesn’t love dogs?  The truth of the matter is, there are plenty of people who don’t—and for good reason.

When uncontrolled dogs hurt people, the damage is not limited to physical wounds. Imagine how you’d feel if you were one of the Marylanders who have experienced a vicious dog attack:

Postal Workers Really Have no Reason to Love Dogs!

Anyone working for the U.S. Postal Service knows how frightening dogs can be.  While many dogs simply appear to be ferocious without ever actually making contact with your mail deliverer, over 5,800 postal workers filed injury claims related to dog attacks in 2020 alone. 43 of those attacks occurred in Baltimore.

Dealing With the Emotional Trauma

A serious or near-fatal dog attack often often leads to overwhelming feelings of terror and helplessness.  Symptoms of Post Traumatic Stress Disorder (PTSD) may appear immediately following an attack, or weeks or months later.  Symptoms might include nightmares, flashbacks, changes in mood or cognition, and avoidance of the memory and of future potential dog encounters. Sometimes people find themselves with heightened anxiety and sleep irregularities. For adults and children alike, these feelings could lead to serious behavior challenges.

Maryland law holds dog owners civilly liable for property damage and injuries unless the dog intervened while someone was committing a crime (like trespassing) on the owner’s property, someone was involved in criminal activity against another person, or someone was taunting or abusing the animal.

If the dog has a history of unprovoked attacks, of biting anyone, or of seriously hurting another domesticated animal, it will be labeled a “dangerous dog” and the owner could face additional criminal charges for an attack.

Have you suffered severe injuries due to an out-of-control dog?  At the Law Office of Hasson D. Barnes our Baltimore personal injury attorneys are prepared to seek damages to address the physical and emotional aftermath of the attack, including potentially seeking compensation for lost wages.  To discuss the possibilities, contact our office for a confidential consultation.