The Cost of Running Red Lights 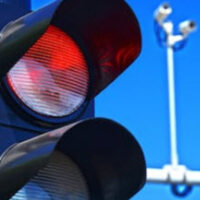 Anita Marie Leach was having a typical day as she drove along Courtleigh Drive one November day.  Until it wasn’t.  Leach’s vehicle was decimated when the driver of a box truck careened through a solid red light, killing Leach and injuring a passenger.  The truck driver was immediately charged with negligent vehicular manslaughter and booked into jail.  That is of little comfort to the victim’s family, however.  Likewise, collecting damages from such an incident could never balance out the loss of a loved one—but it could assist with associated expenses. That is one reason that it is important for victims and families who suffer at the hands of negligent drivers to seek legal counsel following tragedy.

Statistics on the Matter

There are over 300,000 signalized intersections in this country.  Accidents in these intersections are more likely to cause injury and death than in any other place. Red light running (RLR) occurs with greatest frequency during peak traffic hours, and over 95 percent occur within 1.5 seconds of the light changing to red.  According to national statistics, nearly 140.000 people were injured and 846 lost their lives in collisions related to running red lights in 2018 alone. The AAA Foundation reports that nearly one-third of all deaths occurring in intersections with signals were the result of one driver running a red light.  The majority of those fatalities—46 percent—were individuals in vehicles, while about one-third of those who ran the red light were killed.  In just over 5 percent of cases, pedestrians or cyclists were killed.

Why do Drivers Run Reds?

A number of motivations are behind drivers’ decision to enter intersections on a red light.  According to the Department of Transportation, the most often cited excuses include:

Obviously, these preventable accidents would not occur if only drivers would make basic changes to their driving habits:

Dealing with the Aftermath

If you or a loved one has been seriously injured, or worse, killed, because another driver ran a red light, it’s possible you could collect damages to deal with issues like medical bills, lost present and future wages, pain and suffering, and more.  To discuss your options with a compassionate, yet effective Baltimore personal injury attorney, contact the Law Office of Hasson D. Barnes.