The Problem With Bounce Houses 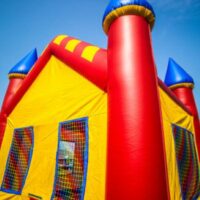 Who wouldn’t want to play in a bounce house?  They’re colorful, full of happy kids, and give youngsters the kind of active play so many parents fear has otherwise been replaced with screen time.  But parents should be advised: the perception that bounce houses are safe is 100 percent false.  That’s according to a pediatric surgeon who knows what he’s talking about.  In a study authored by Dr. Saeed Awan, it was reported that over 82,000 children experienced injuries in a four-year time frame—a number 14 times higher than the previous 4-year time frame.  What gives?

As the demand for bounces houses has risen for attractions like school carnivals, birthday parties, and neighborhood gatherings, so, too have the number of accidents among children. Injuries are most often sustained by being hit by another bouncer, by falling out of the structure, or by getting a limb trapped and twisted while bouncing.  Here’s what else we know:

What makes one bounce house riskier than another? The lack of adult supervision is the greatest contributing factor to injuries. This tends to lead to overfilling the devices, often with children of different ages and weights, making them significantly more prone to accidents. Other issues include:

The most severe and dramatic incidents often involve high winds that rip the bounce house tethers right out of the ground, sending the bounce house full of children spinning into the sky. Another issue relates to deflating bounce houses while, unbeknownst to adults, one or more kids is still inside. These kinds of events can result in serious injuries, and even death.

After a Bounce House Injury

Has your child been seriously injured in a bounce house injury? If so, the importance of investigating the incident cannot be understated.  Was the event properly supervised?  Were proper rules being enforced?  Was the manufacturer responsible for selling a faulty product?  These questions and more will be addressed by Baltimore personal injury attorneys at the Law Office of Hasson D. Barnes.  Contact our office for a confidential consultation today.